4 albums by Recoil. Recoil is the solo project of former Depeche Mode member Alan Wilder. After the first couple of records, it's best described as "Illbient" - the dark, industrial side of Downtempo music. 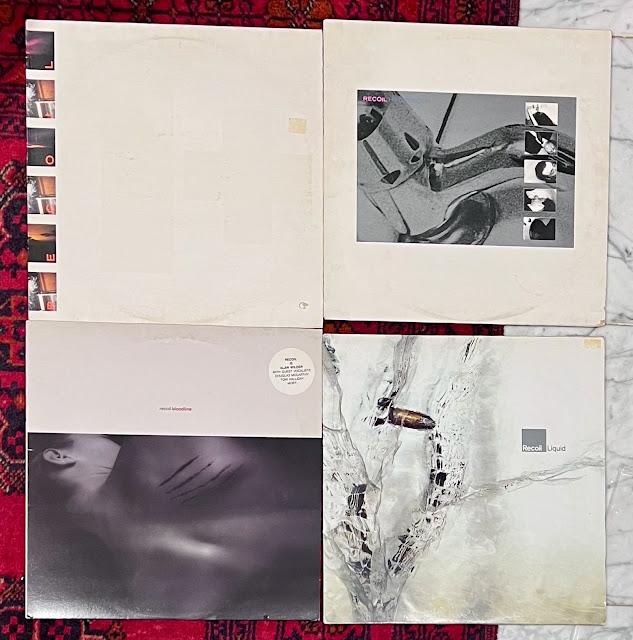 1. 1+2 from 1986 is filled with excerpts from mid 80s Depeche Mode albums all mashed together. You hear little bits of "Shake the Disease" and others mixed in here and there. It's just a 2 song LP.
2. Hydrology from 1988 is similar to the first but more of a cohesive droning electronic soundscape. Wilder called it an antidote to DM and its pop format. The album is 3 songs
3. Bloodline from 1992 starts including vocals from guest artists Toni Halliday from Curve, the Nitzer Ebb singer, and a rapping Moby. This is like a darker, more stark DM's Violator that had recently been completed before this album was recorded.

4. Liquid from 2000 is his 5th LP and 5 years after leaving DM. Also features guest vocalists such as Diamanda Galas. This is the soundtrack to a freaking nightmare. It's a concept album about a near death experience. See the video to see what I mean.

Liquid is one of my all time favorites.
It really departs far from DM, giving the listener a deep, creepy world to sink into. It also shows what Depeche Mode missed out on by not letting him provide a few songs on their albums.
I am missing two other releases on vinyl - 1997s Unsound Methods and 2007s subHuman. Both are a goal but are quite pricey. Either I get them now before they become even more unaffordable, or wait for a price drop. The prices for Recoil have doubled in the past 3 years.
Like
Comment
Share
at February 05, 2022