As I ride this long strange trip called life, one of my goals is to be able to retire at a reasonably young age.  I would have time to road trip, garden to my hearts content, and find out what new hobbies interest me. And sitting by the wave pool at the park while my kid swims like a dolphin...... 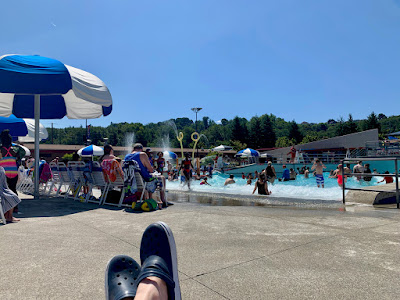 Basically, I do not plan on working until the day I die..

To achieve the goal of financial independence, I invest in dividend growth stocks.  I buy shares of strong companies that return a chunk of their profits as dividends, and ones that have a track record of increasing the dividend.  Since these  shares would be held long term, as the dividend increases my return rate from my initial purchase would also increase.

For example, Boeing currently pays a dividend of around 2.42%.  As they have increased the dividend over the years, my investment now earns 5.27%.   Give it some time, and the dividend will pay more annually than what the shares were purchased for.

What kind of companies should I buy?  I want them to increase dividends, hopefully beat the inflation rate with that dividend at original purchase, and not be paying out too high a percentage of profits in these dividends, so they do not have a risk of cutting the payout.

I am not about to sacrifice my chance at retirement just because I did not want to be a .0000001% owner of a company like Hormel, or Apple, that relies on Chinese plants owned by Foxconn where the workers are in some sketchy conditions.

I own some oil company shares (Phillips 66 and Chevron).  I own some shares of Walmart.  I own shares of McDonald's.  I own Tyson and Hormel. It does not mean I have to eat at McDonald's or shop at Walmart and buy Hormel hot dogs and stuff my face with them.  They are going to be around whether I buy them or not.

But I consciously decided not to own any tobacco companies, like Altria (MO) or Phillip Morris (PM).
It just crossed some line I have with knowingly poisoning their customers with a guaranteed killer.  I believe in personal freedom, but I will not be any percentage of that enabler.  Yes, they are diversified into other fields, but I just feel better in my soul not owning shares of them.  I have a large enough moat of other ethically challenged companies to avoid going down that road.

Some mutual funds claim to be "green" or "ethical".  But to whose ethical limits?

So what's your take on this?   Is there a company that you would refuse to own over some personal ethics?  Do you balance it our with a company that is "ethically pure"?  Am I a hypocrite for buying Chevron but not Phillip Morris?

By the way, here's my.....
DISCLAIMER:   I am not a licensed professional in any sense.  I am not a financial adviser.
Far from it...  This site, my posts, and my opinions of publicly traded companies are for entertainment purposes only.  My personal investments should in no way in hell be considered investment recommendations. If you have money, seek a professional before making any financial decisions.  I am in no way liable for any financial losses occurred by any party that visits this site.