This is the 16th year for my backyard garden.  Every year, I grow a few tomatoes, green beans, and then experiment.     Here is last May....

Ate a lot of salad.

This is a much, much, much different year though.  Thanks to the virus, I would rather not go to the store if I did not have to.  I also had about 4 weeks off of work and spring had sprung.  Why not kick the garden up a notch?

I decided to have the equivalent to the Victory Garden of the WW2 era.  In short, grow enough to keep fed with minimal trips to the store.  Save money and avoid possible exposure.

My main veggie bed is a 20' by 4' raised bed.  In order to grow as much as a possible, I tried my own version of square foot gardening.  Instead of divided squares packed with as much as possible, I plotted it out on graph paper.  I gave green onions a 5'X1' section in the back for example.

To maximize space, I took the recommended spacing for these plants and  halved it.  Basically, I packed it tight.  Then donned my mask, and found some starts.  Got some lettuce and seed onions to start and packed them in.

Then on my second run to the garden patch store, I got 50 more onion starts.  So I ended up packing the 50 onion starts in with the buried 50 seed onions in the 5 sq ft section.    This is what 100 onions look like in 5 square feet. 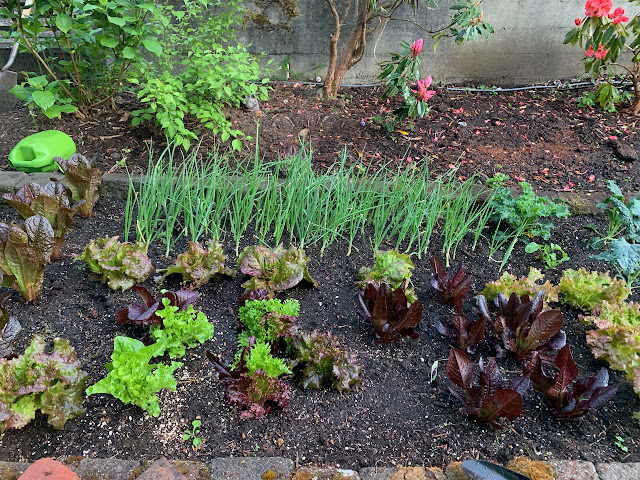 As you can see, I also packed in the letuces.  I chose sme romaine, red sails, a green leaf, and a red romaine.  I planted 41 lettuces in a 10 ft by 4 ft section (minus the onions) 41 lettuces in 35 square feet. 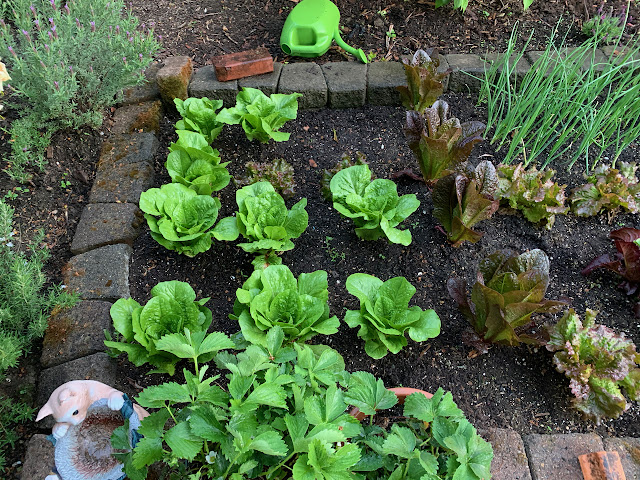 I also decided to plant 6 kales, 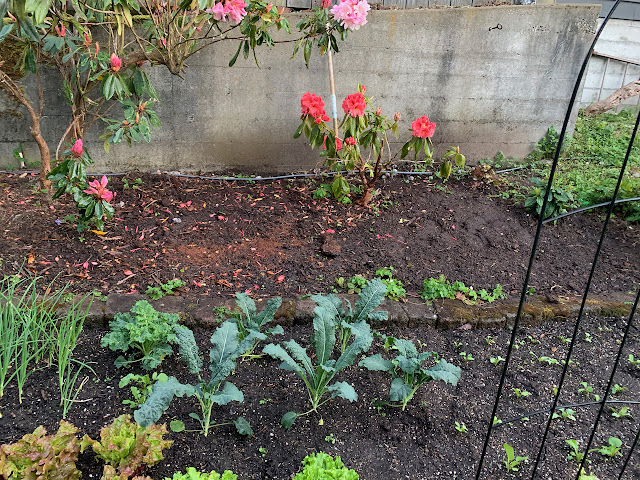 Next to the kale in the back are radishes.   In front of that, turnips.  I found turnip seeds, so I had to go for it. I live turnip greens.   In the foreground, there are pole bean starts that will grow over the turnips.  I also planted some beans from last years packet and will come in a about 2 weeks later.   There is some celery on the lower right.
And on the very right I have some mustard greens. 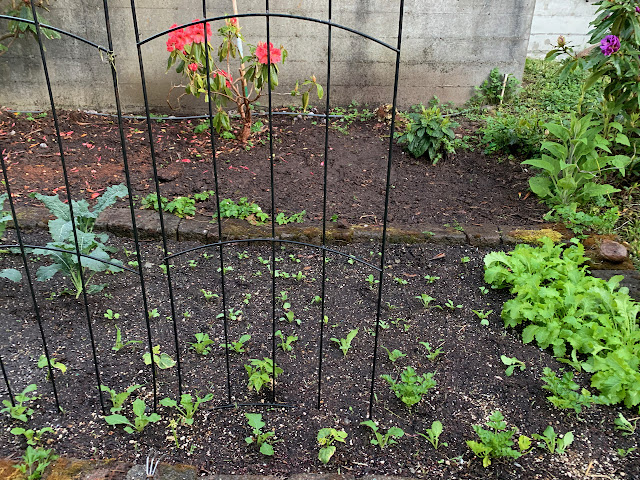 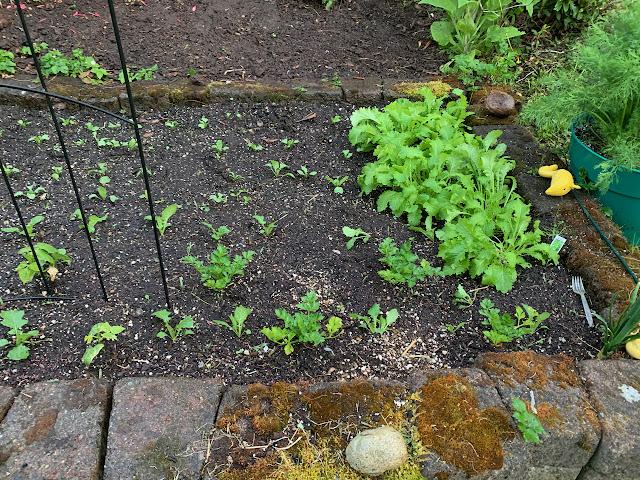 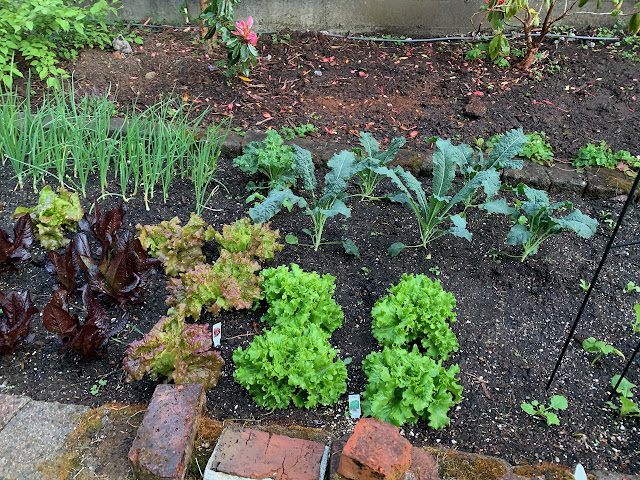 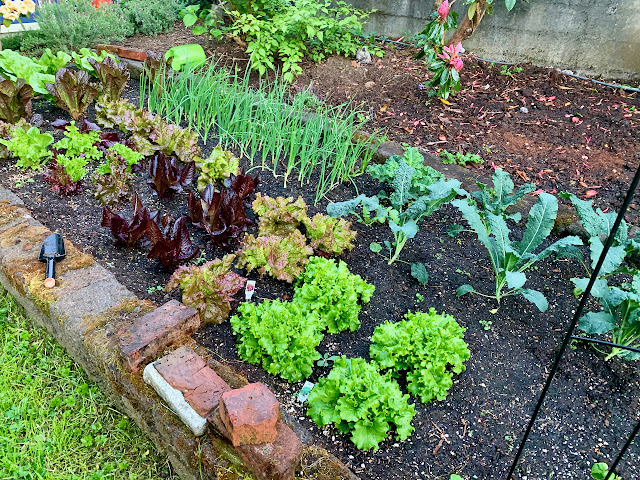 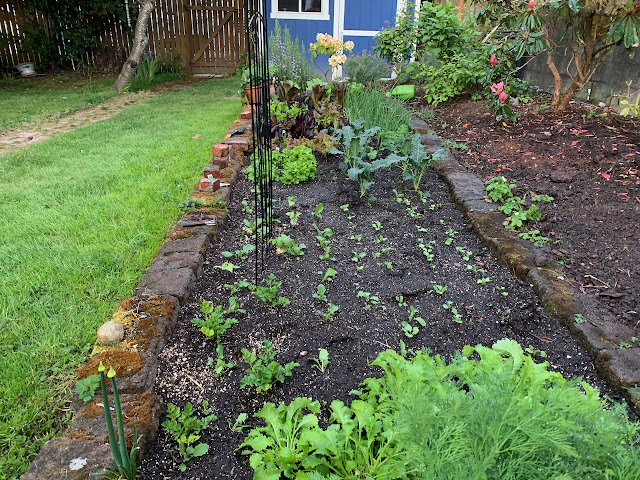 then I also did some herbs.  Like this dill in a pot

Near the back I have an herb garden.  Here is rosemary and oregano.  I plan on filling all the room above my bed with culinary herbs and raspberries. 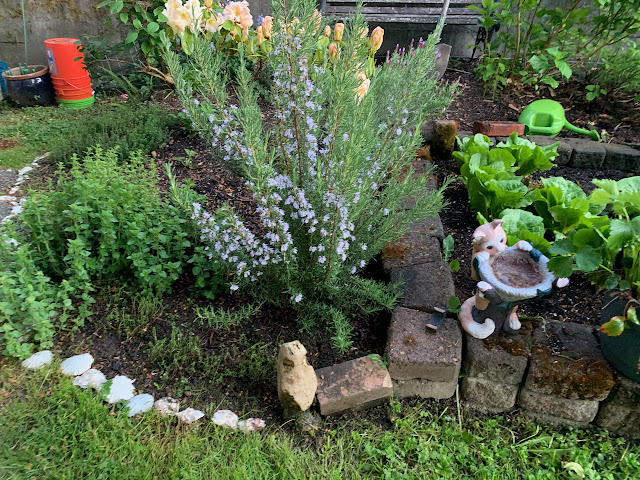 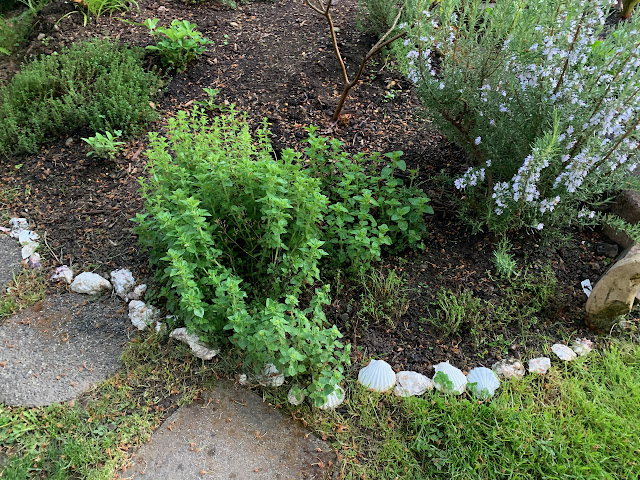 Up past the oregano is a bare stretch where there is asparagus doing its thing. 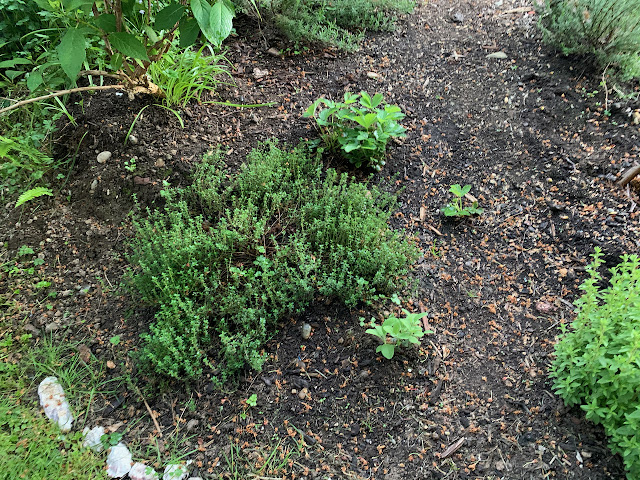 And the lavender that is getting big.


My main thing is tomatoes though.  I got them way earlier than I should have (right at the shut down in mid March), so I bought 9 of them, expecting some would not survive the cool nights.  what helped them along is placing them net to my hot tub which reflected the sun and offered up a sun warmed wall to nestle by.  I also picked up 3 bell peppers. 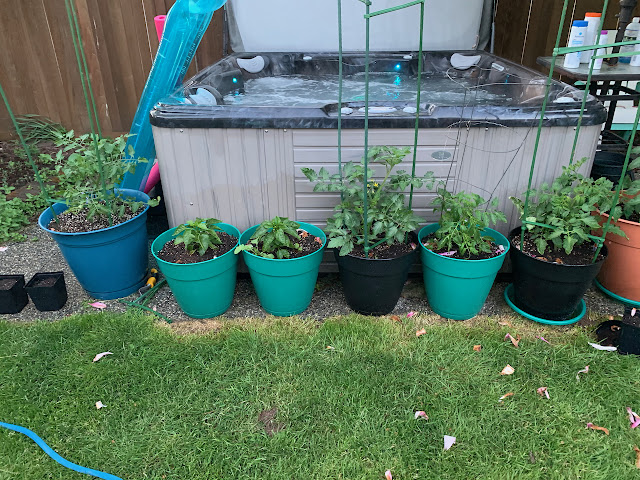 That little starter pot has lovage seed in it.  Hopefully, I will have that annual up above the garden bed along with my rhodies.  Lovage is like a parsley/celery mix where the leaves are herbs, stalks are veggies, and seeds are spices.  And grows up to 6 feet tall. 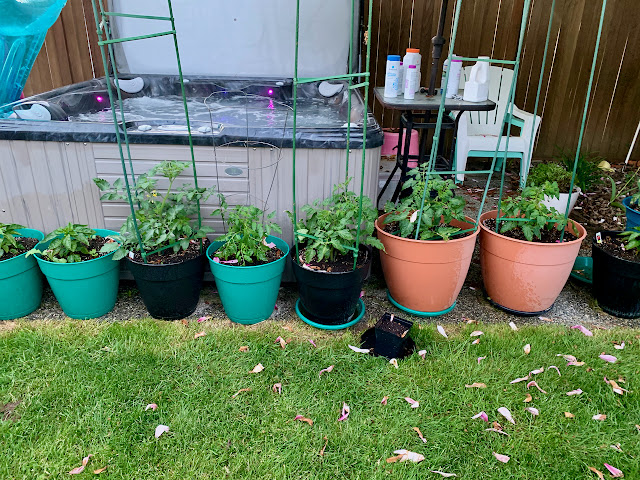 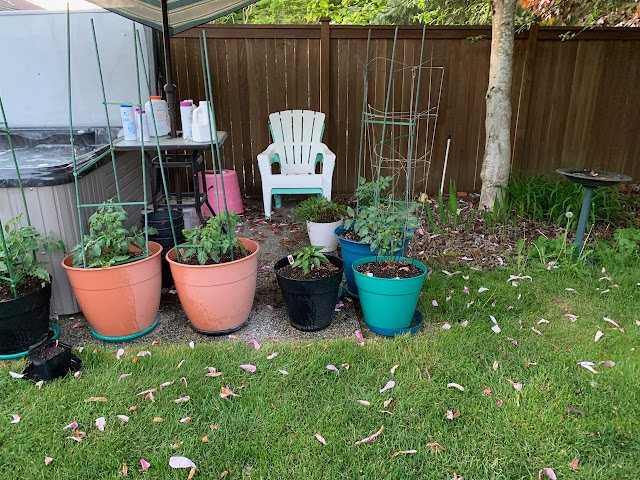 Never have I ever grown so much.

These pictures were from May 6th.   I didn't even photograph the mint bed and the lemon balm that is taking over next ot the hot tub.

The front yard is moe of the same.  2 tomatoes, huge amount of parsley and dill and a fig tree that is taking off

13 days later, the garden has not disappointed.  Huge salads daily.

Radishes! Got the seeds from Italy.  Quite spicy. 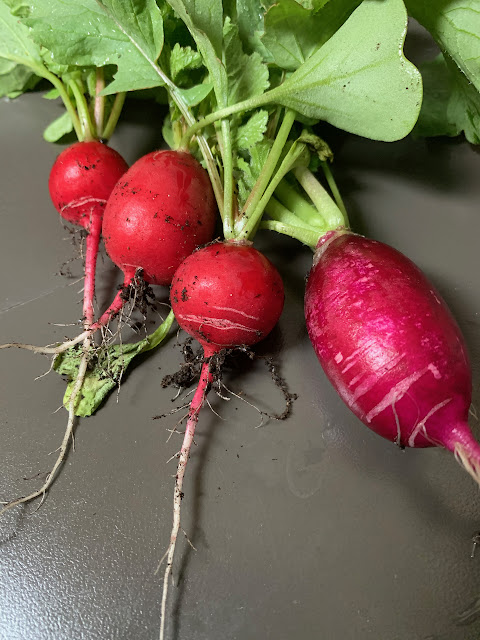 And I just harvested the mustard greens for the first round of that.  These were great! 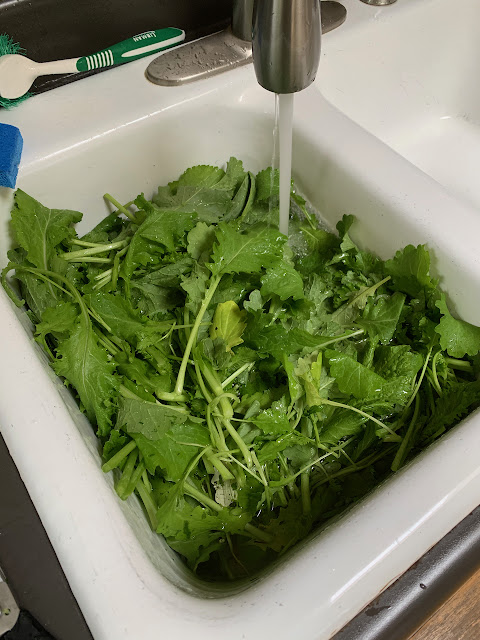 All this keeps me from having to go to the store.   A small investment can feed me for months.
and I can also feed the neighbors the lettuce we cannot get to.


Got some room?  DO IT!   Eating your yard is maybe the most satisfying thing you can do.

To be honest, April actually flew by faster than I expected.  Even though I spent most of the whole month holed up at home with the family, I found more than enough to do.  Lots of gardening, some home school, lots of video games, many bike rides, and a few hikes.  One thing I did not do was write on this blog much.

Even had to venture out to Costco for some much needed paper towels and bought what I believe is the single worst purchase of my life - crispy fish skins.   Egads.   Even the dog even hated them.  That says a lot.

Do yourself a favor and avoid these as much as the virus... 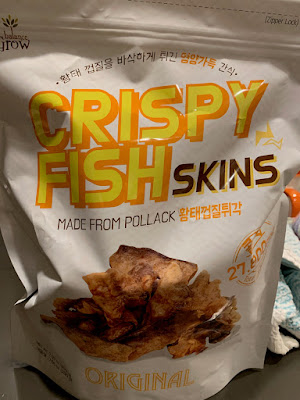 One of the highlights of the month was watching my dividend income trickle in. Good to know that most of the companies did not cut or pause the dividend.


The big ticket item was my Whitehorse Financial (WHF) that provides 37% of my income every three months.  At the time of writing this, they still have not cut their dividend (which currently pays over 16%).   They payout ratio has hit 96%, but are slowly crawling out from the abyss.   Hopefully they keep it as a reward for the stockholders who stuck with them through this.

As the shock waves ripple throughout the world in regards to the impact of Covid 19, I was honestly expecting a large amount of companies cutting or suspending their dividend payments.

I was pleasantly surprised that although GM paused their dividend, I received 9 div raises that really minimized the loss.  The end result was a $59.00 annual loss.  Not bad considering the mess we are in.

We also saw the restart of the dividend for Two Harbors Investment, albeit with a massive cut.  They had paused the $4.00 annual dividend and have returned with a $0.05 annual payout.  Once everything returns to somewhat normal, I have a feeling this will rebound.

May should be much the same.  A few cuts, and an increase here and there.

Here we are. Its May of THE YEAR OF THE PLAGUE... We have bottomed out, sort of.  Who knows?

We may just have begun the march towards total meltdown.  Or we may be over the hump and on our way to learning how to live with this thing.  Only time will tell.

So in the meantime, go hiking in the woods.  The following pic is at Solstice Park in Seattle.  They have stones and paths that match the Solstices and Equinoxes of the sun.  This is on the Spring/Fall Equinox path... 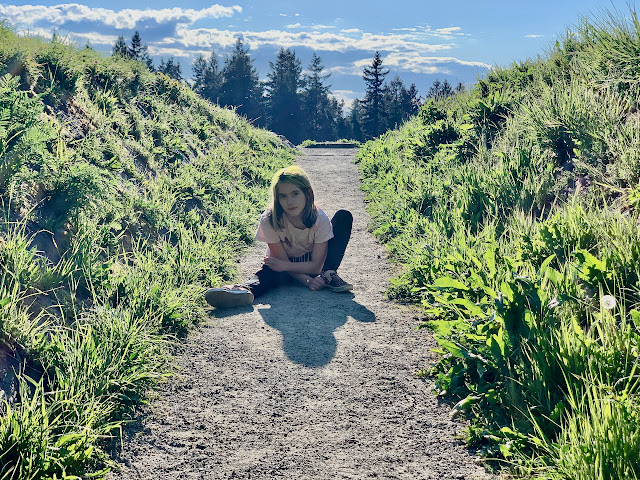 So what did I decide to do other than walk in parks?  That's right.  Buy some shares that could either pay me a fat dividend for life OR crash and burn and be a bet I lost.   After all, all stock market purchasing is is just another type of gambling.  But with much better odds than games in Vegas.  The odds are actually in favor of the holder of these shares in the long run most of the time.

It is more precarious in times like these.  I had about $3,000 of earned dividend to reinvest, and I decided to spend most on a solid performer who's Coronavirus impact is minimal... AT&T.

AT&T is a company that really is not going anywhere.  The price is usually between $30-$40 per share.  The recent dip took it to an area where it is a real bargain.  And look at that yield - 7.21% for that purchase.  what a way to lock in some solid passive income!

So I picked up 75 shares of T,  I cannot resist a dividend for a company this solid.

The rest of the purchases are minor pickups.  A little bit of Morgan Stanley and Bank of Hawaii.

Up next, my dividend increases/cuts of April.  See ya in a day or so!