One of the main goals of mine was to maximize my income in order for a more comfortable life down the road and to pay for my kid's college and to retire without having to freak out about outliving my fixed income..

Today, I want to talk about cutting some of my expenses.   With every dollar I save, that's a dollar I can put to something more tangible in the long run.   These posts keep a good record for me to look back on as well as motivating me to stick with it.  Doing this online and failing and crashing and burning is not an option..lol.

It was my Satellite TV bill.  It's a massive sinkhole.  I have 185 channels, 180 of them are total crap most of the time.  On top of that, the receiver takes about 15 seconds to change a channel.   That results in screaming.  The only saving grace is live TV rewind.  For $100 a MONTH.  SCREW THAT...

But I do have a lifelong love affair with TV.....


So my better half and I decided we will cut the cord.  And live with over the air (OTA) and a box that can record and rewind live tv.  I went to Best Buy and bought a Tablo box that streams the over the air channels on my AppleTV.  It's a $125 one time purchase and a $5 a month forthe OTA schedule feature.  That is $180 this year and $60 next year versus $1,200 per year.

The bummer is I am going to miss watching the Seattle Mariners lose.  I have religiously watched the Mariners play for my whole life.  I think I have seen over 90% of the games aired since 1977.
It's ONLY on ROOT sports, which is only on DirecTV or on Comcast cable.  No streaming without having one of those two.  That blows.  I could get the MLB league pass, turn on a VPN and go around the blackout range, but I the speed is spotty and it freezes...  OH well..

Here's Ken Griffey Jr. in one of his last at bats..

I did get a SlingTV subscription for $30 a month.  I do like watching some shows here and there, like Family Guy, and the national news shows as well as some house flipping stuff.  $30 is a ton better than $100 a month.

So I made the call to DirecTV to cancel after having it for 21 years.   I knew they were going to try to sweet talk me.   I was put on hold (frustrating) and after a minute the c.s. guy returned with an offer of taking $70 a month off of my bill.  Essentially making it the same price as Sling....
And they offered to give me a new receiver for free overnight shipping..

I gave in.  I took the deal and get to keep watching my Mariners miss the payoffs for the 19th straight year.  I went online and cancelled my sling.   I will keep the Tablo.  I like it.  I can record the OTA stuff and watch later.  Nothing like recording an old Star Trek or X-Files show.  Or Julia Child..

So I saved $840 over the next year and still get the Mariners!

I celebrated by wearing some gold jewlery, sunglasses and having  some deviled eggs.... 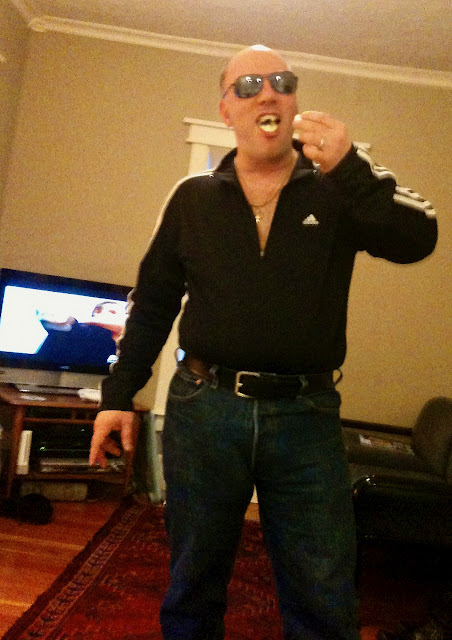 The plan is to call them in a year and try to cancel again.  Either they extend the deal or I will actually cancel.  I'll let you know what happened.

I highly recommend threatening to cut off your cable/satellite TV and see what they offer.