I (Chickenwizard) was born back in February 1969 to a middle class family in Seattle.  We were definitely not rich, but not struggling either.  We lived in a middle class part of a nice neighborhood so it was a few blocks away from the millionaires and a just a few blocks from the cheap rentals.  My father was a letter carrier after a 22 year stint in the Navy.   His retirement was pretty much set up with two fairly nice pensions.   This allowed us to afford my college education. 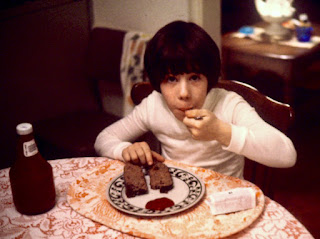 After college, I worked a few starter jobs that just barely made ends meet.  Caterer, pizza delivery driver, worked at a printing press making the "Go Sonics" posters for the basketball games.   My father passed from a lengthy illness when I was 20. I stayed close to my mom to keep an eye on her, as I had promised pops before he died.   Mom was a Greek immigrant with zero education and limited English skills.  I, being an only child, had no choice but to stay close by.

The idea of saving on my own was a distant fantasy.  I took his retirement for granted and my own was so far off, I never saw it in my distant sights.  I knew that someday I may inherit the house, and treated that as my retirement.  quite the hedonistic lifestyle for a few years.  That's what happens when you're young and the world is your oyster.

In 1998, I started working for a now huge online retailer and were offered a large mount of stock options.  After 6 years of being paid barely enough to make rent, and surviving off my girlfriend's income for meals, I could not go on.  I was fully vested with my stock and broke free of the "Golden handcuffs.

I then got to work helping people out and became an admissions counselor at a drug rehab clinic.   The pay was more than double and life was much better. Bought a home and got married.   But I still did not think much about retirement.  My stock was my pension and it was growing quite well.

I was straddled with a mortgage.  We could easily afford it, but it took both of our incomes.   If we were to have a kid, I would have to either pay the house off, or go back to renting.

I was not about to go back to renting and "payin' the man".  My stock was now worth quite a bit and was able to sell the shares and pay off my house.   What I was left with was a good chunk of money, but not nearly enough to retire on.

I started looking into reinvesting the money.  I did not have enough for real estate, but enough to Wall Street.

My first 2 purchases were a chunk of AT&T and about $30,000 of shares (1750 shares) in this new car company, Tesla.  I saw the prototype of the luxury car and thought it would be a success.  In hindsight, it was an idiotic investment when it is half of your money.   Man did I luck out...

It was life on a high wire.  I spent all day watching the price of Tesla go wildly up and down on any bit of news, but was overall growing quickly.   This was like playing a high stakes game of craps in Vegas.  Win big, or see myself lose it all.

Meanwhile my investment of 1,000 shares of  AT&T was not doing any of the fluctuation, and paying me a nice fat chunk of money every three months.  Nothing like seeing a $450  dividend hit my Fidelity account.  Tesla gave me none of that pleasure.  Just ulcers.

The game of putting all my eggs in a basket had gotten to me.  I wasted time at work watching it go up and down and up and down and felt it was driving me to a type of manic depression.  Finally, I could not see Tesla becoming more overvalued than where it was, and decided to sell.  I did make a killing.  I cashed out at around $210 per share and ended up with about $365,000.   It was like hitting a slot machine jackpot and walking away at that very moment.  I had gotten the money back from paying off the house, and breathed a massive sigh of relief.

So what do I do with the money?   I definitely wanted to do some fix ups around the house.  The house had rotting and soft siding on the rainy side and in desperate need of a paint job.

I re-sided the house, painted it, and upgraded my electrical panel and finished the basement.  Then for fun, I took the family to Hawaii for a couple weeks and bought a hot tub.  $50,000 gone in 6 months... 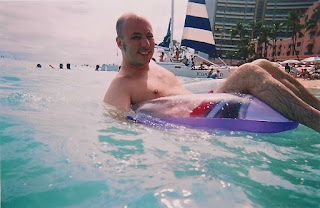 IT struck me that the money was burning a hole in my pocket.   I needed to invest it or it would be piddled away in a mater of years.   I had to invest it back into the stock market.   I sunk it all into AT&T.

I had always heard about diversifying, but it never struck me as a reality until I had done it for myself.  I needed to spread it out.

A friend of my mom's had suggested I look into the "Dividend Aristocrats".   I started learning about dividend growth investing, and checked out some blogs of those living the FIRE lifestyle.  It made perfect sense and I knew this is the direction I had to go.  It was time for me to learn what all these financial numbers are all about.

I  began spreading out from just AT&T to my watch list of about 40 companies.  Phew...

The sense of relief was immense.  My dividends started coming at nearly a daily clip and I came to the realization:

I AM BEING PAID FOR BEING ALIVE.  Whoa.  What a trip.

Why had I not thought of this earlier?

Since then I have added 50 more companies to increase my moat.   I did make some investments I now would not have.  The lure of a giant dividend brings back the  gambling feeling of TSLA.  So over the past year, I have balanced out my portfolio to a place where I feel safe.

I now have the retirement I once did not even think about.  And a paid off home.

My goal now is to make enough to pay for my kid's college without her getting a loan, and be able to earn enough dividends to replace my income 100%.

I am well on my way.   And this had become the most fun hobby I have ever had.   The hobby that will be left for my daugher someday in the future. 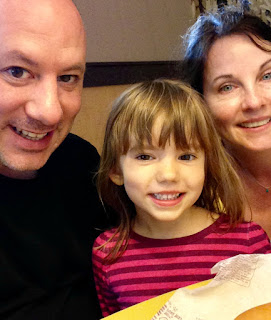 I hope you follow my path and join in some good discussions about dividend investing, and hopefully we all learn something.
at June 21, 2019