December was one of my more exciting months in a long time when it comes to making some buys for my portfolio.

The final tally at the end of the month was that I added $1,304.04 to my investments and gained $360.54 in annual dividends.  Taking profits and reinvesting resulted in getting a 27.4% return on my new money.

Took some profits.  Closed out on companies I was sick of holding.  Got into a few companies I had been waiting to get into.  Reintroduced myself to one of my former major holdings.   Lets go through these one by one after the chart... 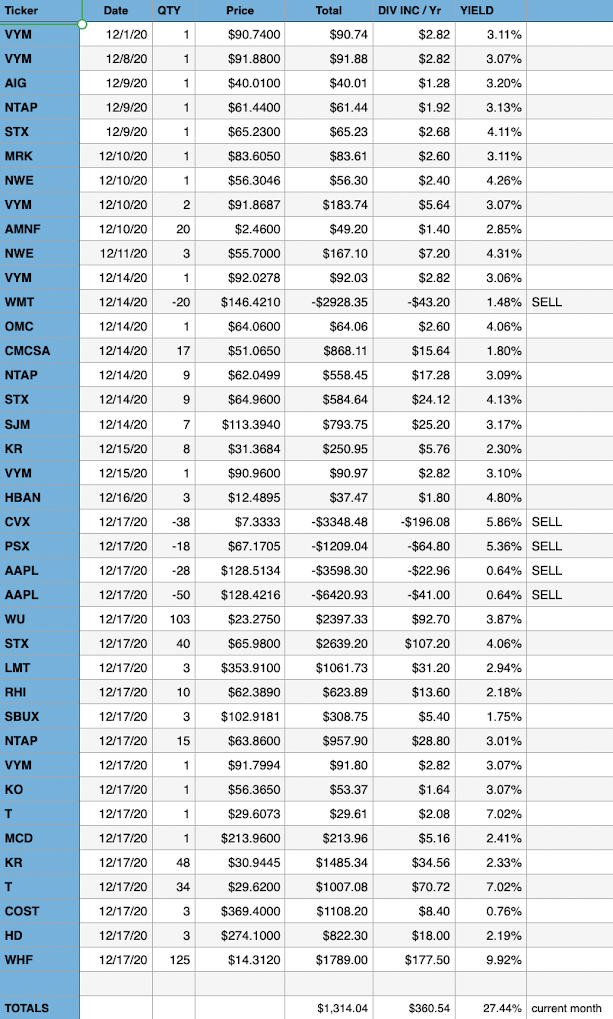 TOOK PROFITS:  Took some Apple profits (AAPL) .  I was over 125% in equity gain.  I do love them and are a solid stock to hold onto, I took the profits to get some shares that give a better dividend return.  I will start buying them again in late March.

CLOSED OUT:   Closed out on my gas companies.  Got rid of Chevron (CVX) and Phillips 66 (PSX).  I see them as mired in a world where we are heading away from gas and oil consumption.  Covid has reduced commutes and I believe is a new normal.  Yes, they had nice dividends, but were in no position to increase them in the foreseeable future.  Bye bye.  Not feeling a bit of remorse.

I also closed out on Wal Mart (WMT).  I prefer owning Target, and I did not care for the way they pay out dividends.  Announce 4 payments once a year and have them pay in an odd pattern.   So I took their profits also.

NEW BUYS:   Comcast (CMCSA).  Been waiting far too long to get a position with Comcast.

AIG Insurance (AIG)  Another patiently waiting on my watch list.

Lockheed Martin (LMT) Yet another that sat on my watch list forever.

Netapp (NTAP).  A tech company that has was a good value IMO.

Seagate Technology (STX). Another tech company I wanted to pull a trigger on.

Smuckers (SJM).  I honestly do not know why I did not own this years ago.

REINTRODUCTION:   Back in early august, I wrote about how I jettisoned one of my biggest holdings, Whitehorse Finance (WHF), a business development company that I owned from their early days.  They had always paid out about 10% annually in dividends and I took full advantage of that for a solid 6 years.

During the Pandemic, they took a major hit.  I wrote about it here: JULY 2020 BUYS, SELLS AND MAJOR CHANGES - PART 1

Their payout ratio (normally in a safe range) spiked up to 947%.  Their P/E also leaped up to 64.5.  If they did not right the ship, both the dividend and their stock price would have taken a major hit.  I had already experienced that with some REITs in 2019 and was not about to see my largest holding collapse.

The cost of my protection from possible failure of WHF was a $450 dividend payout in Q4 and about $1 per share.  A small price to pay for the security of not losing $17K had they gone tits up.

OTHER BUYS:   I also increased my holdings in Kroger (KR), Western Union (WU), AT&T (T) of course, Robert Half (RHI), and Starbucks (SBUX).

To sum this up:  This was one fun month in investing and like where I am at more than ever.