THE DAMNED - FRIDAY THE 13TH EP 38 YEARS OLD THIS WEEK

Next week, this awesome 4 song EP from The Damned will be 38 years old.   Perfect for the fall season and deserves a visit on it's birthday,

The Damned is maybe rock's most underrated band. At least I think so.  Got the credit for the first punk single in 1976, and the first punk rock album "Damned Damned Damend" put out 6 months before the Sex Pistols took over the scene.   The Clash used to open up for them.   But other than a few minor hits in the mid 80's, The Damned never got past cult status in the US, which is a shame for larger than life characters of Dave Vanian and Captain Sensible and his fur suits..

After a couple years, The Damned evolved into much more than a British Punk band.  This EP represents the continuation of the evolution of The Damned from the 3 chord punk godfathers to being more open to other sounds that were more 60's psychedelic, atmospheric, poppy, and goth, often all at the same time.  When you have a lead singer who was an actual gravedigger before being in the band, what else do you expect... 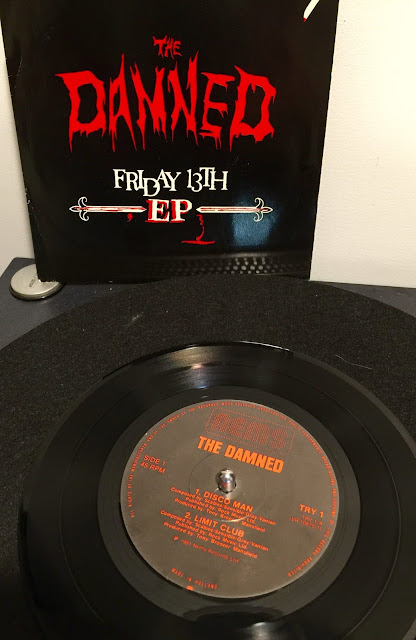 This hit #50 in the UK charts, mainly off the lead off track and live favorite "Disco Man".    No video, but a clip from a German TV performance in 1982.  Wish the  quality was sharper, but you get the feel and the very tongue in cheelk lyrics,

The last song on side B was a great cover of the Rolling Stones' super psychedelic "Citadel" from 1967's "Their Satanic Majesties Request" LP.    It really fit The Damned's sound at this time and carried on to 1982's "Strawberries" LP.   IMO, I favor this cover than the Stones' original..


So I hope you enjoyed this trip back to 1981. And hope to have inspired you to check out more of one of my favorite bands of all time, The Damned.

Email ThisBlogThis!Share to TwitterShare to FacebookShare to Pinterest
Labels: THE DAMNED