Welcome to entry #3 of what I've been spinning recently.  I will try to update this every 2 weeks or so moving forward.

Been going back to some older sounds, mainly the 60's and 80's, as well as a new release from an older band and a current artist my kid turned me on to.

Left to right from top row 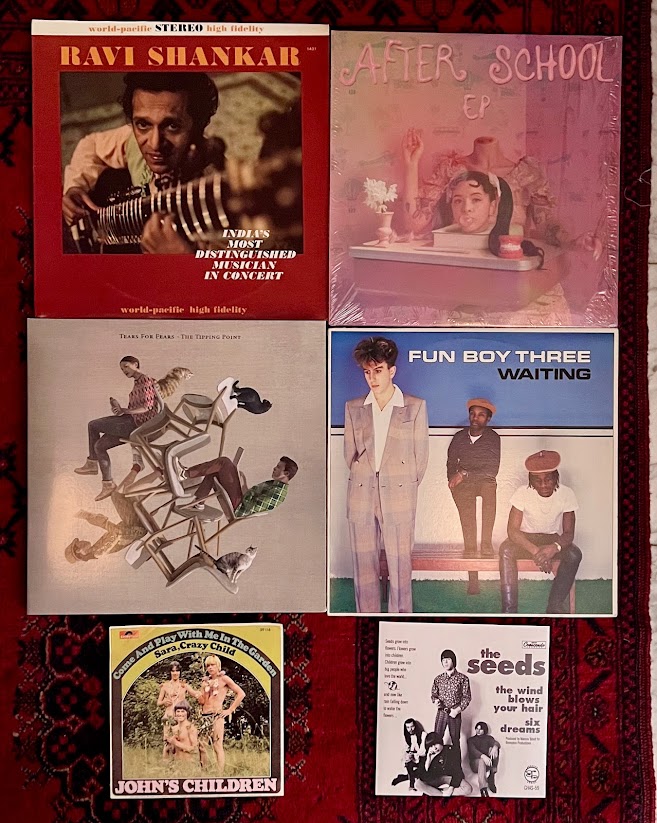 1.) Ravi Shankar - India's Most Distinguished Musician In Concert  Picked up this ultra clean 1962 release in a thrift store.  Always loved Indian music. This is Ravi Shankar before his mentoring George Harrison on the sitar.  The whole "raga rock" band fad of the late 60's were triggered by Shankar as well as The Beatles incorporating a track of George's Indian music on a couple albums.  For a concert, this is a very clean recording.  Also hase some very informative liner notes.  Good music to put on when reading and in a mellow, relaxed, meditative mood.  Ohm.

2.) Melanie Martinez - After School EP  This late 2020 release is a follow up to her "K-12" LP released the previous year.  She's not as connected to her Cry-Baby persona on these tracks, but is still some very quirky alternative pop.  The cover really appealed to me.  What I really like with this release is that it's on 45rpm on some heavyweight vinyl and has great sound quality for a colored disc.   Here's the "Test Me" video...

3.) Tears For Fears - The Tipping Point  My first 2022 release and the first studio album by this duo in almost 18 years, which was a reunion of Roland ORzabal and Curt Smith after almost 15 years before that.  This album is closer to their debut "The Hurting" than any of their other releases.  There are no anthem type tubes like "Shout".  What you do get are a group of songs dealing with the grief from the loss of Orzabal's wife as well as a sense of acceptance of those feelings and that life does go on.   They still maintain their sound but it all has a level of maturity and reflection that only years of experience and the emotional toll of grief can give.  This is a great listen.  Here's "The Tipping Point"

4.) Fun Boy Three - Waiting  Fun Boy Three was formed 1981 by the three singers of The Specials after their breakup and was active for only 2 years.   David Byrne produced this second and last album in 1983.  Full of sharp social commentary put to a catchy New Wave sound, this album also features a cover of the Go-Go's "Our Lips Are Sealed", which Terry Hall co-wrote with Jane Wiedlin.  Unfortunately, they split after this album due to poor sales.  But looking back, this was one of the best albums of 1983.  Terry Hall has since reunited The Specials with Fun Boy Three's Lynval Golding.   Here's "Our Lips Are Sealed"

5.) John's Children - Come And Play With Me In The Garden   This 1967 single by the UK psychedelic/mod band that featured Marc Bolan before he started T. Rex.  Their claim to fame was upstaging The Who with their outrageous opening act and being booted off their tour.  This single has one risque cover for that time.  Their next single "Desdemona", was banned by the BBC for the lyric "lift up your skirt and fly".  Then they broke up..

6.) The Seeds - The Wind Blows Your Hair.   This is the Los Angeles version of psychedelic garage band music headlined by one of the most eccentric musicians of all time, Sky Saxon. This is one of the classics of garage music.  Here's the single:

That's when his story gets really strange.

He joins the Yahowa religious group, led by a Father Yod, is renamed Airlick and Sunlight, and records up to 65 of psychedelic tribal music by a group named Ya Ho Wa 13, most of which are lost.

In August of 1975, despite having no hang gliding experience, Yod decided to hang glide and leapt off a 1,300 foot cliff on eastern O'Ahu.  He crash landed on the beach suffering no external injuries, but was unable to move and died 9 hours later.

This is not made up.

The rest of their music are all memorials to Father Yod.

Here's a song they made as Children of the Sixth Root Race...  "We Are The Dinosaurs"

By around 2003, Sky reforms the Seeds.  They play oldies shows until 2009, when Sky Saxon passes.

I'll have another set of records in a couple weeks.