A few days ago I picked up a copy of the only album by The Velvert Turner Group.

You are now currently saying to yourself, "Who the hell is Velvert Turner"?!?!?!?  So did I.  This is where it gets interesting.

Velvert Turner happened to be a close friend and the only student of Jimi Hendrix.   They met in 1966 and took to each other as they both had a love for the guitar.  Jimi mentored him through instructional sessions at Jimi's apartment in Greenwich Village.

As Jimi's popularity grew, Velvert was invited to the concerts and would mention he is friends of Jimi.  Almost no one believed him.  After Jimi's death in 1970, Velvert decided to form his own band, the Velvert Turner Group.  In 1972, their only album was released. 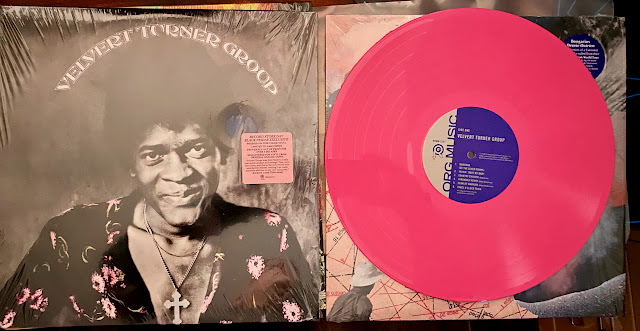 The guitar stylings and vocals eerily resemble Hendrix's.  He would even play guitar with his teeth and behind his head.  Here's a track from the album.  And yes, this does sound almost exactly like Jimi Hendrix, vocals and all..

But this album did not sell well.  It was seen as "behind the times".  Fickle audiences of 1972 had moved on from Jimi's wild psychedelic 60's style.

He performed sporadically after the LP, and his former bandmates went on to play in other groups including The Motels, The Knack, The New York Dolls and Burning Sensations.  Quite the backup band....

This pink vinyl reissue was a Record Store Day release back in 2017.  2,000 copies were pressed.

And yes, it will make you wonder what it would have been like to see them play together at the same time.

I'll be working on picking up the pace posting bits and pieces of my record colection that I think are interesting.