One of the more interesting releases of the early 80's is this single by Psychic TV in 1984.  Psychic TV was formed in 1981 by Genesis P-Orridge when the extreme performance art group Throbbing Gristle split up.


Psychic TV is a tough band to pin down.  They have morphed over the years from industrial noise to psychedelic to nightmarish techno to acid house.  Basically all following Genesis P-Orridge's (now Genesis Breyer P-Orridge) tastes throughout the years.

This one, from the psychedelic era, is an ode to Brian Jones, the late Rolling Stone guitarist.  It has a guitar riff quite similar to Brown Sugar (even though that was 2 years after Brian had passed). 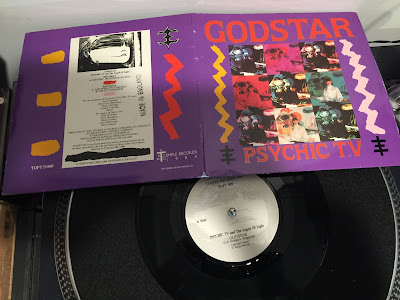 Found this at a garage sale this summer.  This is the limited edition 2x7" with a gatefold sleeve.  The B-sides are a Godstar remix, "Discopravity" and "Yes It's The B Side", the latter two being more experimental and ethereal.


A real catchy tune.  Psychic TV did not keep this style, as they went off the industrial house seriously crazy sounding performance art.

Beginning in 2003, Genesis and his partner Lady Jane Breyer began the "Pandorgeny Project" in 2003, where they began to perform surgical alterations to both of their bodies in order to become a single pandrogenous being named "Breyer P-Orrige".  they received breast implants, cheek and chin implants, eye and nose jobs, and hormone therapy until Lady Jane passed away with stomach cancer in 2007.

The changes have continued so Genesis looks like this... 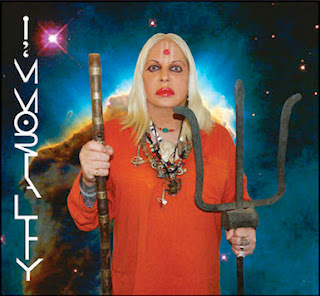