There is nothing like the lead singer of Mudhoney covering Bob Dylan.

"The Freewheelin' Mark Arm" single (SUB POP 87)  was a one off solo effort by one of the fathers of grunge (I hate that term).  Recorded by Jack Endino at Reciprocal Recordings.  This has never been released on CD or digital to my knowledge.

This camo out in November 1990, almost exactly one year before the release of "Smells Like Teen Spirit" destroyed the Seattle Sound (grunge?!?) for the fans in Seattle by becoming a worldwide smash hit.

The cover is a take off of Bob Dylan's "Freewheelin' Bob Dylan" album.  The gas mask adds a nice touch.. 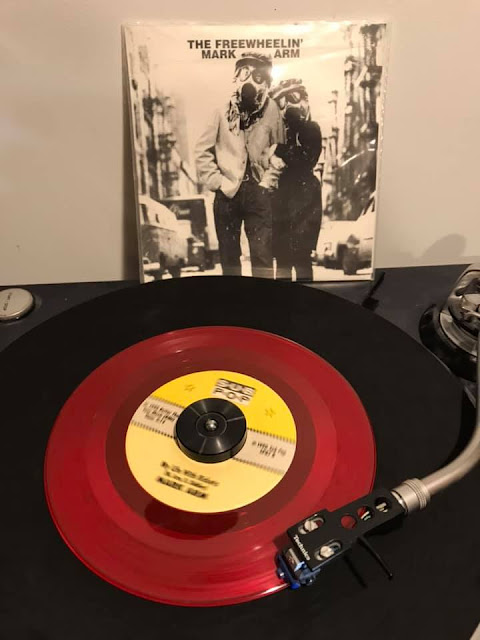 Got this years ago at some Seattle record store for about $7.  It came in orange, red, green, purple, and black vinyl.

Side A is "Masters of War", a Bob Dylan cover.  It actually has a Velvet Underground kind of sound to it.  Great cover.

Side B is a an original.  To say the least..  "My Life With Rickets". Kind of a Bo Diddly meets the Seattle sound.   The lyrics of the first verse: