BIG SHAKE UP IN MY PORTFOLIO

About two weeks ago, I stated I was going to sell Answorth Mortgage Asset Corporation (ANH) after they handed my the 4th  dividend cut in the past 2 years. 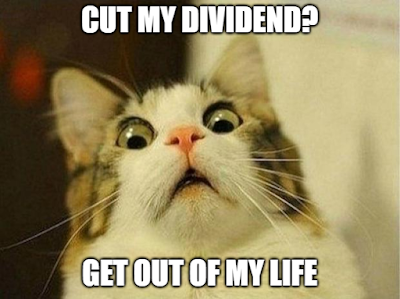 My whole investment strategy is to buy companies that have a record of raising their dividend, not cut them.  So I did what I had to do.

I knew it was a matter of time.  I bought them (and a few other REITs) because of the huge dividend payout (upwards of 10%). but in the long run, it will only dwindle down the tubes.

Plus their price had sunk to where I did not see a recovery.  ANH was down 27% this year alone.  a price drop did not mean they were a bargain since the dividend was also falling. Better to cut ties and invest in solid companies with a track record I can trust.

My mind and my heart was not in favor of REITs like this anymore.  IMO, REITs are a tease.  I still have shares in Realty Income (O), but at least they are keeping up with maintaining their dividend (and increasing it by tiny amounts every so often)

So I sold 3 REITs today that only brought frustration.   I got rid of ANH, Annaly Capital Management (NLY), and AGNC.   All three cut their dividends more than once recently and nothing is showing that that pattern will change.  I hate selling , but I feel relieved in a case like this.

Yes, I did have quite a return, and my Year To Year dividends will take a hit, but in the long run, I will gain more.

So here are my trades for September:

Now, in 6 years, I should be up a few hundred at the least.   I am on much more solid footing with purchases from the likes of Raytheon, Delta Air Lines, and Bank of America.
Six years from now, I will be very glad I did this.