It was just another warm afternoon and I had some time to take a stroll in my local supermarket (QFC).  I usually look around, find something tasty, and scrape up a dinner for my wife and I.

Lo and behold, they had rabbit in the frozen section reserves for stuff like frozen soup bones and chitlins.  Next to that sits the Miracle Whip. WTF?

As soon as I saw the rabbit, a memory of my Greek mother making a braised "chicken" one night flashed into my memory.  I was about 12, and she had served this braised chicken with some veggies with a sinister grin on her face.  Everything was fine and tasted like chicken.  Then I bit into some bones that sure did not come from chicken. THIS IS NOT CHICKEN.   It was like a leg and thigh that came from a mutant chicken or chicken flavored trukey leg.

I then flashed to what it could have been.  Oh the horror.

Once, I opened our 2nd fridge in our basement and found a plucked sparrow that had hit the window.  She eventually steamed it and spit it out after one bite.

At that moment, if she had told me cat, I would have not been surprised.  I had no idea what this thing  was other than it tasted like chicken.

So I got the frozen rabbit and decided to recreate the meal I had at age 12. I called mom and let her know and she got all excited and told me to make "rabbit fricassee".  I listened to her recipe, stored it in my memory and went about to make a nice savory braised rabbit with some veggies

Serve it with some buttered egg noodles and a green salad and this dish will change the mind of any one weary of eating a cute little bunny.

Maybe Wiley E Coyote had it right all along.

A butcher can order you a rabbit if they do not carry it in the store. 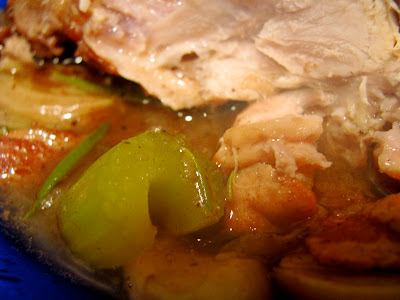 In a large Dutch oven (or other heavy pot), heat the olive oil over medium-high flame. Season rabbit pieces with salt and pepper. When the oil is hot, brown the rabbit in batches so it’s nice and browned on all sides, about 6-7 minutes.  Don’t cram it all in for one browning or you steam your meat!  Put rabbit on plate and add the onions, celery, garlic, and sauté for about 5 minutes until they are translucent

Add the wine, and stir to scrape any browned bits from the bottom. Bring the wine to  boil for a minute or two; then add the tomato, chicken broth, rosemary, thyme, and oregano. Add the rabbit back in, and stir to combine.  Cover tightly, and place the rabbit into a preheated oven for 1 to 1 1/2 hours, or until the rabbit is fork tender. Remove and stir in the fresh parsley. Taste it and add salt to taste. Allow to rest covered for 20 minutes before serving.

Serve it with some buttered egg noodles and of course some bread to soak up the goodness. 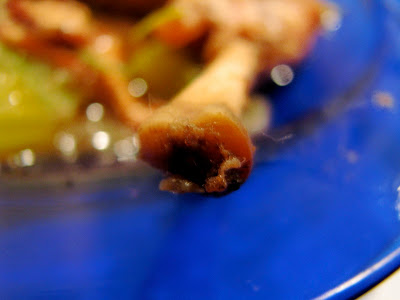